With this issue, Franklin’s adventures begin in earnest. For an introduction to this ongoing project, click here.

Blame it on a childhood spent as the oddball and the outsider–I often find myself irresistibly drawn to knitting techniques that can’t get a seat with the cool kids.

Shadow knitting (sometimes called illusion knitting) is one such. I remember with perfect clarity the first time I saw it. I was a fledgling, making my maiden visit to a fiber festival. As I toddled through the vendor market with a clutch of far more experienced knitters, I came to a dead stop in front of a striped sweater with a geometric pattern that appeared out of nowhere, then disappeared. Then appeared. Then disappeared. Then–

You get the idea.

The leader of our group winced. Her chief lieutenant came to my defense–sort of. “He’s new,” she said. “He doesn’t know any better.”

It was explained to me, as I was gently but firmly pointed towards the more respectable Fair Isle sweaters in the next booth, that shadow knitting was not quite comme il faut. “It’s cute for kid stuff,” the lieutenant said. “You can hide secret messages in it…if you like that sort of thing.”

Shadow knitting has become a fascination for me in the past year, and not coincidentally the topic of one of my most frequently requested classes.

Here’s a nutshell tour of how it works. 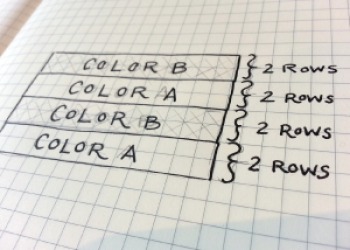 These two stripes don’t only differ in color; they differ in texture as well. One is always stockinette; other is always garter stitch. 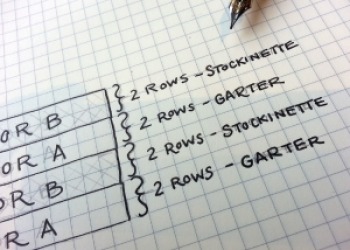 When you look at this stuff from the top, you see the stripes.

When you look at it from an oblique angle, the hidden pattern pops up. 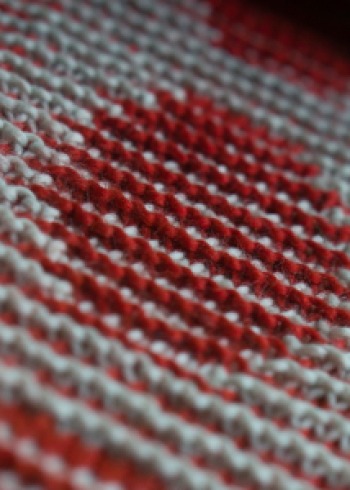 That’s it. That’s all there is to it–or so I was told.

The fabric is straightforward, but so what? There’s not a whole lot to the structure of stranded color work, either; yet nobody suggests the residents of Fair Isle have been wasting their time exploring it. Why should shadow knitting be considered a one-trick pony?

I can’t help but be intrigued by a technique that’s neither color knitting nor texture knitting: it’s both. It has to be both. Remove either the texture or the color and it falls apart.

Students in my classes have been treated (?) to the fruits of my ongoing fascination, including experiments with motifs large and small, deliberate obscurity, changes in grain, and alternative charting methods.  But you are getting the first look at the latest adventure.

Though shadow knitting requires that the stockinette and garter stripes be different colors, the color of either may be changed at will–provided you take care to change in the first row of the stripe. I’ve used that to fun effect in some of my projects.

That set me to pondering what might happen if I relaxed my iron grip on the finished product and let the yarns decide what colors would end up in each stripe.

I’d tried unsuccessfully to combine two heavily variegated yarns in a shadow swatch, hoping the flashing and pooling would for once work to my benefit. No dice. All I got was an incomprehensible mush of colors. It turns out that for this to work, you need a yarn whose color changes are long and gradual.

Gradient had pretty much everything I was looking for in this experiment. It’s pure wool, it’s worsted weight, and the clear colors shift from one to the next at a nearly imperceptible rate.

The only thing I wasn’t quite sure about was the shape of the strand. In my classes, I’m accustomed to telling to students to look out for yarns that are smooth, regular, and round.  By round, I mean that if you cut the yarn into cross sections like a salami, this is roughly what you’d see.

Round yarns are usually made of multiple strands (called singles) twisted together. When you twist the singles together they become “plies”; and three or more plies tend to yield the round profile that makes shadow patterns stand out.

Gradient isn’t built like that. It’s a “singles” yarn–in effect, one thick strand.  It has a very slight irregularity in profile, too.

That can make even plain stockinette look enchanting–but I feared might goof up the shadow patterning.

However, in knitting as in all of life, you never know if it’s going to work unless you try it.  I shudder to think how many beautiful things are not brought into the world because the maker talks him- or herself out of the making.

One thought on “Fridays with Franklin – Adventure in the Shadows, Part One”

Sometimes finding the right contrast between colors can really make a project POP! One of the things we love about 𝐇𝐢𝐊𝐨𝐨® 𝘾𝙤𝙣𝙘𝙚𝙣𝙩𝙧𝙞𝙘 𝘾𝙤𝙩𝙩𝙤𝙣 is how contrasting colors are blended into the perfect gradient all in one cake!⁠
Our "F*ck off! I'm Knitting!" bag may not be our finest moment, but it is a moment! Featuring a wooly sheep, who looks as if "F*ck Off!" is exactly what she is thinking, makes us laugh. ⁠
It's funky shawl weather!⁠⠀⁠
Organize in style! 💙⁠
Craving a little color?⁠⠀⁠
Did you know we carry all sorts of Undyed yarns? ⁠