For an introduction to this ongoing series, click here.

A couple months ago I got a call from a buddy at Skacel.

“Ah. Well, I don’t want to interrupt the party, but are you interested in trying a new yarn? One hundred percent microfiber. Absorbent, durable. Fluffy. Soft. You can machine wash it, you can bleach it. Pretty wild.”

“I’m not sure,” I said. “Wild isn’t my thing, remember? You were there when I passed out from doing double treble crochet.”

“There’s no giggling on NOVA.”

“I’m putting it in the mail,” he said. “When you’ve pulled yourself together maybe you do something cute with it.” 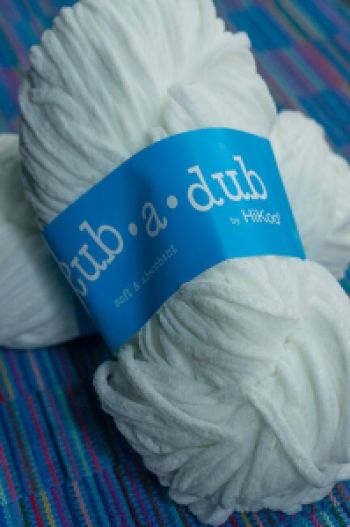 HiKoo Rub-a-Dub is squishy. When you wind it, it makes a ball as big as your face. 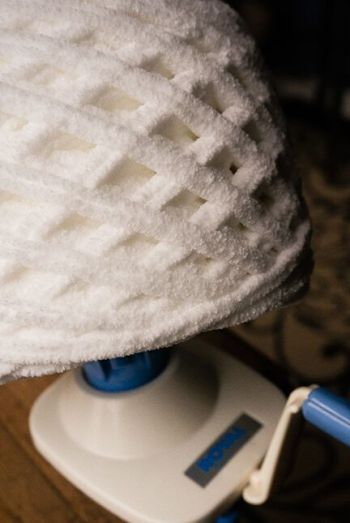 As the name (giggle) suggests, it was made with applications for the bath (and other soggy venues) in mind. There are two free patterns (a bath mitt and a washcloth) inside the band.

The bath mitt pattern reminded me of a fellow I used to see in the locker room at the Harvard Club in Boston from time to time. He was more active than the mummies on NOVA, but equally a relic of a bygone era. I found the trappings of his Jazz Age masculinity fascinating. He used pomade on his hair, Bay Rum on his face, and a bath strap on his–well, on the rest of him.

In case you’re unfamiliar with the concept of a bath strap, it looks something like this. 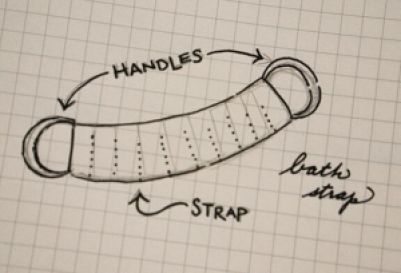 You hold the handles and drag the strap back and forth across those hard-to-reach places. Store-bought bath straps are often made from something like sisal, which gently exfoliates your skin in rather the same way that the pagans gently exfoliated St. Bartholomew (look it up).

I fancied I could use Rub-a-Dub to make up my own bath strap.

My first thought was to knit it. Knitting is my comfort zone. I’ve knit washcloths.

But a bath strap is used differently than a washcloth. You don’t bunch it up and rub it around, you grab the ends and pull it tight. To work properly, it must withstand tugging and pulling without stretching out of shape.

Crochet stretches; however, when yarn and gauge are equivalent, crochet stretches less than knitting. As I fancied practicing my crochet skills, that settled the question.

This is my incredibly thoughtful preliminary sketch. 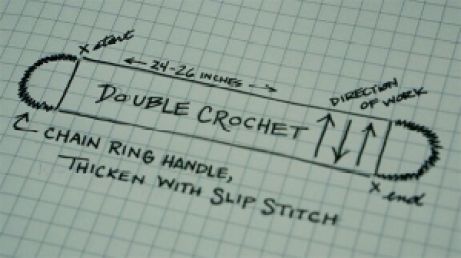 Laugh, if you will; but I sketch out even quite simple projects. Sketching is a first go at giving an airy nothing some physical form. It forces me to consider proportions, edges, boundaries, structures. As I draw what I want to make, I think about how I’d like to make it. Can it be done in one piece? If so, where best to begin? Where will I end? Can I get there from here?

I figured the finished length by extending a tape measure behind my back until it was just about right for effective scrubbing. I left the width an open question until I’d finished swatching.

Rub-a-Dub is fluffy as a freshly blow-dried cat, so I selected a bunch of crochet hooks from the fatter end of my collection 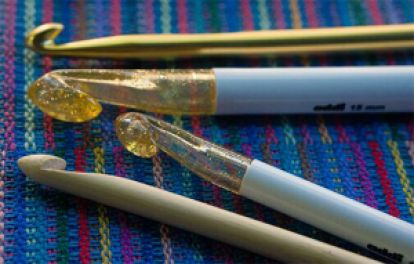 and got down to it.

The whole swatch is in double crochet, because it’s the stitch I’ve worked the most so I could remember how to do it without looking it up. 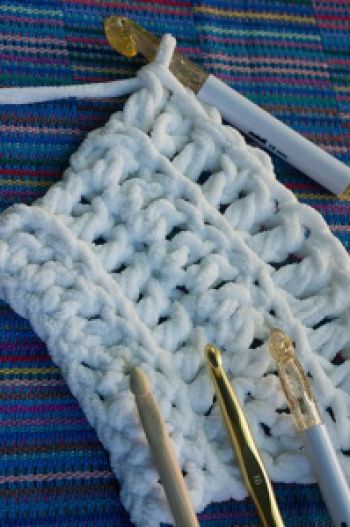 In between was the 10 mm, which cranked out a good fabric. It also, being made of metal, slipped pleasantly through the yarn.

Just for the ducks of it, I did try out a smaller (6 mm) hook to see what would happen. 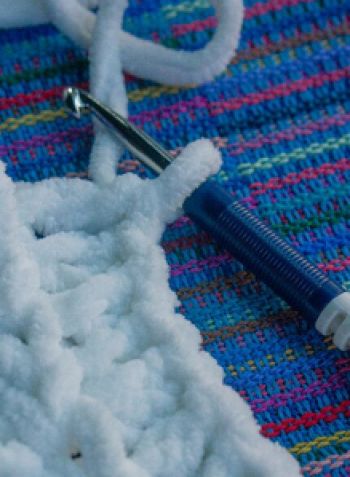 It wasn’t a success. The hook had trouble grabbing and holding the strand; working a single row took ages. And the smaller stitches were so compressed that the fabric turned hard and unpleasantly lumpy. Clearly, Rub-a-Dub (giggle) is a yarn that needs room to breathe.

If the following pattern for a crocheted bath strap doesn’t seem like much of a pattern, that’s because I’m not much of a crocheter. I love crochet, I’m just not too good at it yet.

On the other hand, the strap employs all four maneuvers I can do without referring to Maggie Righetti’s Crocheting in Plain English. When you look at it that way, it’s kind of a tour-de-force.

Fetch yourself a skein of Rub-a-Dub and a US Size N (10 mm) crochet hook. You may need to use a hook that’s smaller or larger. Gauge isn’t vital, but you don’t want the strap to be stiff as cardboard or loose as fishnet.

*  Ch 3, turn work, dbl crochet into back loop only of next 10.  (11 stitches total) Note: Working only into the back loops on every row creates a slightly corrugated fabric, which feels nice against the skin.

Rep from * until strap is 25 inches long (or desired length) not including handle.

Ch 9. With sl st, join chain to opposite corner of strap. 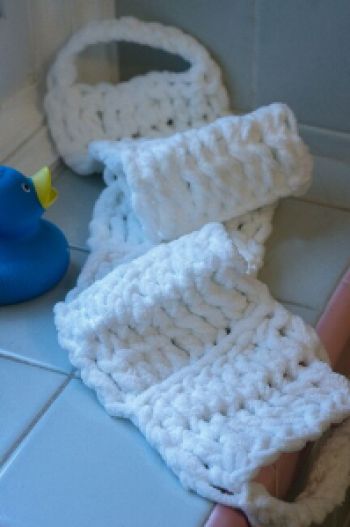 The only thing left to do was a practical test, so I headed for the shower. I was delighted. Soap, hot water, vigorous friction, and the yarn didn’t snap or shed or otherwise misbehave. Hanging in the shower, it dried almost completely within an hour or so.

However, the bath strap had used only about half the ball, leaving me with a quantity of unused Rub-a-Dub (giggle) still sitting around.

That would not do.

And that’s when…the idea hit me.

The next part of this adventure will appear in two weeks.

Designer, teacher, author and illustrator Franklin Habit is the author of It Itches: A Stash of Knitting Cartoons (Interweave Press, 2008) and proprietor of The Panopticon, one of the most popular knitting blogs on the Internet. On an average day, upwards of 2,500 readers worldwide drop in for a mix of essays, cartoons, and the continuing adventures of Dolores the Sheep.

He travels constantly to teach knitters at shops and guilds across the country and internationally; and has been a popular member of the faculties of such festivals as Vogue Knitting Live!, STITCHES Events, Squam Arts Workshops, Sock Summit, and the Madrona Fiber Arts Winter Retreat.

Franklin lives in Chicago, Illinois, cohabiting shamelessly with 15,000 books, a Schacht spinning wheel, two looms, and a colony of yarn that multiplies whenever his back is turned.

Do you wish your knitting was better and that you had an expert knitter by your side to help you when it goes wrong?⁠
This stunning 100% Superwash Merino Wool in cakes is none other than 𝙇𝙖𝙘𝙚 𝙁𝙡𝙤𝙬𝙚𝙧, by 𝗦𝗰𝗵𝗼𝗽𝗽𝗲𝗹-𝗪𝗼𝗹𝗹𝗲. It comes in cakes and is ready to knit or crochet with no winding necessary!⁠
Apricate AP-ri-kayt (verb): To bask in the sun. This fun word comes from the Latin word apricus, meaning exposed to the sun. 🌞⁠
Another fabulous pattern that uses 𝙇𝙞𝙛𝙚 𝙎𝙩𝙮𝙡𝙚 (formerly 𝘼𝙢𝙗𝙞𝙚𝙣𝙩𝙚)by 𝗦𝗰𝗵𝗼𝗽𝗽𝗲𝗹 is this super-simple crochet cowl. Worked flat and fastened with a button, this self-striping yarn does all the work for you!⁠
We're not sure if this was intentional, but 𝘼𝙢𝙗𝙞𝙚𝙣𝙩𝙚 yarn is now known as 𝙇𝙞𝙛𝙚 𝙎𝙩𝙮𝙡𝙚... not to be confused with 𝙇𝙞𝙛𝙚𝙨𝙩𝙮𝙡𝙚! 😅 It's okay, though, these two yarns were meant to play together!⁠
The idea for Loose Ends came about when the founders, Jennifer Simonic and Masey Kaplan, both avid knitters, realized that they had a shared experience: Friends would often ask them to finish blankets, sweaters, or other projects left undone by deceased loved ones. They always do so enthusiastically, understanding what it feels like to wear something a loved one has made.⁠