For an introduction to this ongoing series, click here.
For the first part of this adventure, click here.

So, I wanted to weave a patterned scarf on my rigid heddle loom. Weaving does not begin with weaving. Weaving begins with warping. You cannot weave until your loom is dressed in its full and correct complement of warp threads.

Warping has a grim reputation, even among some dedicated weavers. It is painstaking, slow, sometimes back-breaking work. There are many steps. If you fail to do any of them correctly, your fabric will not come out as intended. Putting on the warp for a substantial length of cloth may take anywhere from several hours to several days.* I suspect warping to be the reason for nine-tenths of the “Loom for Sale, Never Used” ads on Craigslist.

This gave me pause as I stood looking at the naked loom. Should I chicken out and just knit something? No. I might wind up strangled in my own yarn, but I wasn’t going to give in without a fight.

My guide and inspiration was Jane Patrick (creative director for Schacht Spindle Company, which makes the Cricket) via her fantastic The Weaver’s Idea Book: Creative Cloth on a Rigid Heddle Loom (Interweave Press, 2010).On page 121 are a pair of “Windowpane Effect” fabrics that caught my eye. One of these, Jane notes, “would be quite effective for a jacket pattern. Think Chanel.”

I’m a red-blooded American male. You don’t have to tell me twice to think Chanel.The fabric as Jane designed it requires three colors, and I had to hand three emphatically gorgeous colors of Hikoo Rylie–Periwinkle, Freesia, and Guava.

Seemed like a good bet. Two cool colors for a muted background, with a closely-related warm color, Guava, for the eye-catching windowpane.Moreover, I like scarves that drape. Rylie is made from three fibers–baby alpaca, silk, and linen–that are famous for drape. The yarn is soft, strong, and lustrous into the bargain. Perfect.Jane Patrick provides a crystal-clear warp threading color chart for the fabric. I set out to follow it to the letter. That seemed like plan enough for me.

I wrote above that weaving doesn’t begin with weaving, it begins with warping. However, some would say that weaving truly begins with a worksheet full of careful calculations. Those people are right, and I need to learn from them.

This was not my first go at a rigid heddle scarf. I’d made three, but all were extremely simple and wholly improvisational. When warping, I’d had no clear target. I put threads on willy-nilly and started weaving.

In following Jane’s recipe, I intended no alterations aside from a few extra strands of Guava at each selvedge. These would, I assumed, provide a handsome and stable border of plain weave to set off the windowpane. Notice that word: assumed.

Jane says a great many wise things in her book. What she says most is, “Sample!”. Weaving samples in the weaver’s equivalent of a knitter’s swatching, and it’s every bit as vital.Did I sample? I did not. I was excited, you see.

I was so excited that I did not sit down and use readily available, simple, time-tested weaver’s calculations to figure out how long my warp ought to be, and how much of each weft color I would require.

I did not then warp a small amount according to the plan, and upon it weave a sample and see if I liked the design and the fabric. Because I was excited.

You know how in this column I went on and on about how much I love to swatch and how important swatching is? Yeah, well…I didn’t swatch.

One of the benefits of a rigid heddle loom is that it’s easy to warp.

You can, if you like, warp it much as you would warp a multi-harness loom. This usually involves a warping board, carefully placed warp ties, warping sticks, and other baggage that allows you to keep your many threads in order. The process pretty much forces you to think ahead. If you don’t, you aren’t going to get far.

The rigid heddle allows for a clever, simple method called “direct warping.” Direct warping is so within the grasp of even the newest weaver that Schacht includes thorough, brief instructions with the loom itself. Jane also illustrates the steps in The Weaver’s Idea Book.

With this technique, you can put on a simple warp in forty minutes or less. No joke.

And because it is so simple, direct warping doesn’t absolutely require the planning and forethought that go into dressing a multi-harness loom. This isn’t to say you shouldn’t still have a carefully considered plan; but you don’t have to. And I didn’t.***

I’m not going to take you through every step of direct warping here, as it’s so well detailed elsewhere. I’ll just point out that the very ease and speed, combined with my eager nature, led me to do something with my warp that I should not have done: I decided to just wing it.

Here are a couple of highlights.Direct warping doesn’t need a separate warping board or similar apparatus to measure the length of your threads. That’s great news if, like me, you live in a small space. In direct warping, it’s the distance between the loom itself and a single peg, attached to some surface in the vicinity, that determines how long your warp will be.

As I hadn’t considered properly how long to make my threads, I guessed.****

If you are striping your warp with narrow stripes, as I was, direct warping will in theory allow you to carry the different yarns along, rather than cutting and re-joining them for each stripe. However, if your yarn tends to stick to itself when strands rub against one another, this happens: 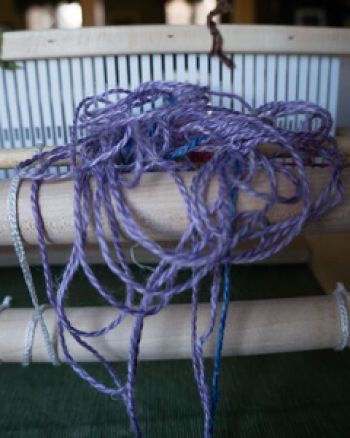 I realized pretty quickly that with Rylie, I’d do better to cut and tie off each stripe. You can see in this shot of the back apron rod, where I made the change. A small detail, but giving up the short cut quadrupled my speed and eliminated my frustration.

Mind you, this is not a flaw in the yarn. It’s simply the nature of it. In all the arts, there is a universal truth: you either acknowledge the nature of your materials and adjust your technique accordingly; or you can forge ahead in denial, and suffer.

So I pressed on, slot by slot. When the threading was complete, I found myself deeply in love with the Rapunzel ponytail that I’d created. It seemed like a lot of yarn. An awful lot of yarn.***** But it was pretty. 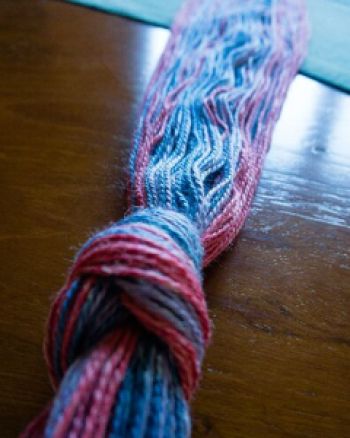 Two hours later, after tying on to the front rod, your threads are at last in their proper order. The colors of the Rylie, lined up next to one another, transformed from merely glowing to absolutely radiant.Things began to look truly promising.

Will the promise be realized? See you in two weeks.

*Knitters, keep that in mind next time you grouse about having to cast on two hundred stitches.

**This will come back to haunt me.

***This will come back to haunt me.

One thought on “Fridays with Franklin – The Adventure of the Scarf That Ate the World, Part Two”

We do love a simple shawl! 💕⁠
30% OFF our remaining weaving supplies! ⁠
This two-colored shawlette designed by Michelle Hunter features 𝐇𝐢𝐊𝐨𝐨® 𝘾𝙤𝘽𝙖𝙎𝙞 and can be worn as a stylish scarf or over the shoulders on a chilly evening. Knit with two hanks for the main color and one hank for the contrasting color, the pattern features many color techniques all supported with online video instruction.⁠
Enjoy 20% off through Sunday! Crafted of sustainable bamboo, the addiClick Bamboo set provides a patented click-in tip that will never come unscrewed while knitting. No tools are required to make a quick tip change; simply insert the cord deep into the tip, twist, and release. ⁠
We've got just a few more of these kits available from this month's Knit Box! These exclusive kits include: ⁠
A little bit of alpaca goes a long way in this outstanding new sock yarn from 𝐇𝐢𝐊𝐨𝐨®! 𝙈𝙖𝙙𝙧𝙤𝙣𝙖 is so fluffy, we've made socks, shawls, cowls, and even sweaters with it using up to a US 7 needle! ⁠